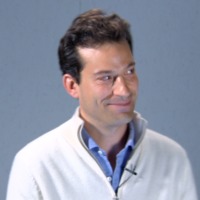 Specializing in classical literature (Latin and Greek) and then English literature, former pupil of the rue d'Ulm (1992-96), he studied philosophy and logic at the Sorbonne (Paris 1), passed the agrégation of philosophy (1995) and his postgraduate diploma (1996) in analytical philosophy under the supervision of Claudine Engel-Tiercelin, then he devoted his studies to perfecting his level in Chinese, starting in 1992 at the University of Cambridge (1996-98).

The following year, he undertook a doctoral thesis in the genesis of meditative practices and techniques of political domination in the early texts of ancient Taoism, under the supervision of Professor Mark Edward Lewis. This thesis was completed at Harvard University during the year 2000-01 thanks to funding from the Harvard-Sachs Foundation and the Taiwanese Foundation Chiang Ching-kuo, and in 2001, he won the Louis Forest award from the Chancery of the universities of Paris, given to the best project in foreign civilizations. Elected lecturer in 2003, Romain Graziani shares his teaching between the Université Paris-Diderot (languages and civilizations of East Asia), the l’Ecole Normale Supérieure in rue d'Ulm, Sciences-Po Paris and the University of Geneva. Romain Graziani passed his accreditation thesis in 2007 and was elected Professor at the ENS Arts and Humanities faculty in 2009. The same year he was elected Junior member at the Institut Universitaire de France.

His most recent research within the IAO has focused on the Taoist thinkers of ancient China (Les Corps dans le taoïsme ancien, 2011), the uses and manipulations of the human body in Chinese society (Ecrits de Maître Guan), the texts of Tchouang-tseu (Fictions philosophiques du Tchouang-tseu) the relationship between rites and laws in ancient China, the development of self-writing in medieval times (“Une voix pour l’évasion”, 2015), the nature and role of the spirits in China (of Self and Spirits), the links between political power and scholars at the era of the Three Kingdoms (3rd century), the father figure in classical China (socially-instituted father, questioned father). His latest research has focused on the development of economic speculation and methods of tax exploitation in ancient China (4th century BCE), which preluded the birth of modern-day bureaucracy and capitalism.

Romain Graziani is currently preparing a general essay on the paradoxes of voluntary action of texts from European and Chinese literary traditions; a monograph on Han Fei-Tseu (died 233 BC) the designer of the totalitarian monarchy and absolute domination, a collection of translations of contemporary Chinese poetry.