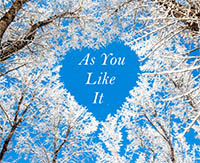 Vendredi 06 jan 2017 - Samedi 07 jan 2017
Description générale
This international conference will offer new perspectives on Shakespeare's light-hearted comedy with contributions on sexual identification, dance, virtue, politics and the materiality of the stage.
Keynote speakers include Michael Hattaway (NYU in London), Richard Wilson (Kingston University) and Will West (Northwestern University).
The Conference will be followed by an afternoon concert by the Sorbonne Scholars, Shakespeare's music as you like it. More information