Workshop CECAM : Computation of transition trajectories and rare events in ... 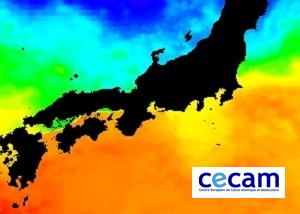 Information about the CECAM Workshop

Dynamics of turbulent flows, chemistry of complex molecules, biochemistry, and biophysics often involve a huge number of degrees of freedom and a large spectrum of temporal and spatial scales.  In the dynamics of these systems, microscopic low-intensity disorganized motion can lead to events which are extremely rare for the microscopic dynamics, but are essential for understanding the macroscopic properties. Classical examples are activation processes leading to the transition between two very different states (e.g., conformational change, which is typical in chemistry, polymer physics, biomolecules), or situations of phase transitions in magnetic systems or in solid state physics. The present workshop focuses on anologous phenomena in non-equilibrium systems.  For instance, much less studied examples of rare trajectories leading to drastic global changes are the transitions between two or more attractors in turbulent flows (e.g., polarity reversal for the Earth's magnetic field, weather regimes in meteorology, the Kuroshio current's bistability, or bistability situations in turbulent convection).   Whatever the system studied, such rare events have in common that they appear with very low frequencies compared to the temporal scale at which simulations are usually carried out. Observing them in a numerical simulation using, e.g., molecular dynamics or direct numerical simulation in turbulence, is thus extremely difficult and simply impossible in many instances, such as the study of the Earth's magnetic polarity change in a genuine turbulent regime.   The numerical computation of transition trajectories has been developed for a long time. One of the drawbacks of classical approaches (e.g., transition path sampling, equilibrium Monte Carlo algorithm, string methods) is that they mainly deal with statistical equilibrium problems. By contrast, many applications require methods dealing with non-equilibrium situations (chemistry, biology, turbulence). For instance, in the field of hydrodynamics and turbulence, even if rare events have been studied for a very long time, there exists no specific numerical algorithm that can be used to compute them, and the recent interest for those approaches is related to the possibility to deal with non-equilibrium problems.

An essential originality of our workshop is to gather people who recently developed approaches that can be applied to non-equilibrium problems as well as equilibrium problems (e.g., multilevel splitting, numerical computation of instantons using Freidlin-Wentzell's large deviation theory, Giardina-Tailleur-Kurchan algorithm). These new tools have mainly been developed within the statistical mechanics community, sometimes in relation to applications, sometimes in order to address theoretical issues. Some of the recent non-equilibrium methods (e.g., the Fokker-Planck and thermodynamics-of-histories approaches) have also been developed in relation with applications (e.g., glassy behavior, phase transitions).  The efficiency of some of these non-equilibrium algorithms have recently been studied in a precise way by mathematicians to delineate their limitations and use them in an optimal way.


The scientific aim of this workshop is to gather people that recently devised dedicated algorithms that allow the computation of transition trajectories and rare events, with an emphasis on applications to non-equilibrium problems. Whereas specific specialized conferences or workshops have been organized recently in some of the interested communities, the novelty of our program is to gather different communities: i. theoretical statistical mechanics and mathematics, ii. chemistry, polymer physics, biocomputation, iii. turbulence and hydrodynamics, iv. mathematics. The specific focus of the workshop is to deal with methodologies and algorithms. This should enable ideas to propagate beyond the original community that promoted them, and favor the emergence of novel concepts, by getting these communities to meet and interact.   Since some of the ideas are currently developing fast in some of the communities, but do not exist yet in others, the organization of this program now seems especially appropriate. Some of the phenomena of interest are currently studied in a number of experimental groups (there currently exists an unprecedented interest in turbulence, and a lasting interest in biophysics and  chemistry).


This meeting is expected to have a two-stage program. In the first part, we plan to organize a two-day introductory school where specialists of some of the numerical methods mentioned earlier will present their work to a large audience of researchers, post-docs and PhD students. A three-day workshop will follow, where researchers will present up-to-date results in order to favor discussions aimed at developing new methods.  The aim of this application to CECAM is to fund the three-day workshop only.  Complementary funds have already been found through other applications (ANR, IXXI, GDR) or have been applied for (ENS de Lyon, CNRS) in order to organize the introductory school.