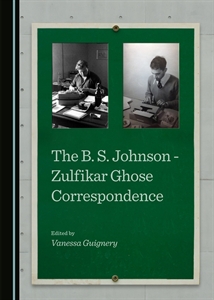 Description
From 1959 to 1973, the writers B. S. Johnson and Zulfikar Ghose regularly wrote letters to each other in which they discussed their own work and literary preoccupations. They exchanged early drafts of poems, short stories, plays and novels, and their correspondence contains detailed comments and extended analyses of these texts, as well as illuminating reflections on literature, criticism, poetics and aesthetics.
Though much of the correspondence is an extended literary discussion, it also contains moments of personal revelation, jokes and anecdotes so that the letters, with their surprising asides, are enjoyable to read, even as they inform with their biographical and intellectual content. The two authors also frequently refer to the university poetry journals and literary magazines they contributed to or edited, and they write about the poetry meetings they attended and the writers they met or read. Their involvement in literary groups and their dealings with publishers, editors and agents are indicative of the publishing mechanisms of the time.
This correspondence thus not only provides insight into the work of both B. S. Johnson and Zulfikar Ghose, but also conjures up a comprehensive picture of the London literary world of the 1960s.
-------------
Vanessa Guignery, ed.
The B. S. Johnson - Zulfikar Ghose Correspondence.
Newcastle upon Tyne: Cambridge Scholars Publishing, 2015. 485 p.