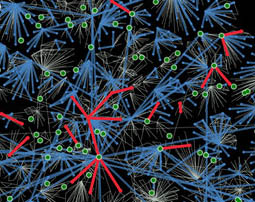 Description
Global patterns of adoption spreading are induced by local adoption cascades initiated by multiple spontaneous adopters arriving at a constant rate, amplified by a large number of adoptions induced by social influence, and controlled by individuals who are immune to the actual adoption. This study, published in Scientific Reports (Nature), shows that the structure of real-world adoption clusters is radically different from previous theoretical expectations. Vulnerable adoptions, induced by a single adopting neighbour, appear to be important only locally. Instead stable adopters, who are initially resisting to be exposed, are actually responsible for the emergence of global social adoption.
This study is based on an observation of payed service adoptions evolved over 8 years on the social network of Skype, which connects over 500 million people all around the world. This data was analysed by data analytics method, using mathematical modelling and statistical techniques. A behavioural threshold theory from sociology was used to categorise people by how vulnerable or immune they are to other people's decisions.
"Our observations and model helps us to understand the underlying structural differences between emergent global patterns of adoption spreading. We explain why some cases of adoption processes, like online memes or information cascades, emerge rapidly and while others, like adoption of products or services, evolve with a moderate speed" explains Márton Karsai, assistant professor at Ecole Normale Supérieure de Lyon (France) with INRIA research chair, and AScI visiting researcher at the Department of Computer Science at Aalto University (Finland).
According to the study, people can be classified into three groups in a way they adopt new ideas : Full article on line
Márton Karsai, (IXXI, ENS de Lyon). Márton Karsai and Riivo Kikas from the University of Tartu and STACC worked on the data analysis. Gerardo Iñiguez and Márton Karsai developed and analysed the threshold model. Professors Kimmo Kaski from the Department of Computer Science at Aalto University and János Kertész from Central European University supervised the study.
References: M. Karsai et al., Local cascades induced global contagion: How heterogeneous thresholds, exogenous effects, and unconcerned behaviour govern online adoption spreading. Scientific Reports 6, 27178 (2016). doi:10.1038/srep27178