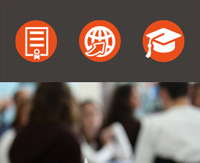 Mehari Zerihun, Ethiopie, promotion 2012-2014
I applied to the AtoSIM master program because I wanted to develop a solid foundation on modeling and computer simulations in general. The fact that the program encompasses both theory and simulations across multiple disciplines that traditionally regarded as separate has made it appealing for my interest. In addition, the modules that I took during the scientific computing course has given me the opportunity to grasp the concepts of computer programming and scientific software development. Even though I am yet to start a PhD study, I believe that the AtoSIM master has put me on an advantageous position to be competitive for PhD position that require programming skills, and modeling and computer simulations.

Albert Einstein : 'Life is like riding a bicycle. To keep your balance, you must keep moving.'

Indeed, the modern world benefits only those who remain enthusiastic, competitive, determined and who constantly improve their professional and personal qualities. The ATOSiM course has played a significant role in my life as I took it as a unique chance to develop valuable character traits as well as to expand the range of my academic achievements.
While applying to the course many think about opportunies which the programme gives, such as profound academic training, fascinating international experience, a good chance to find a job in the industrial or research domain after graduation. Each point is undoubtedly extremely significant and should not be underestimated.
As concerns education, the first term in Amsterdam provides one with basic background that is essential to study successfully in the other countries. In addition, the Amsterdam universities are the most well-equipped ones I have ever seen. Throughout the second term in Rome students are provided with original theoretical support that can hardly be mastered anywhere else. In particular, I am really proud of having attended courses given by such world-famous scientists as Francesco Sciortino and Irene Bozzoni. However, both terms serve to prepare students for studying at ENS Lyon where educational standards are very high.
Regarding international experience, a six-month period seems to be enough to appreciate a different country and get acquainted with its culture. One will amaze at how it is important to have a bicycle in Amsterdam, taste the famous Italian cuisine and marvel at the historical heritage of Rome, fall in love with the city of Saint-Exupéry and André Ampère. Those willing to study foreing languages will definitely thrive on various language courses provided by ENS Lyon.
Meanwhile, studying abroad is to a certain extent rather hard. One has to learn how to live a long way from home, how to make friends among people belonging to different cultures and how to respect traditions of others. For some such difficulties become particularly challenging, while they can significantly strengthen those who do not give up.