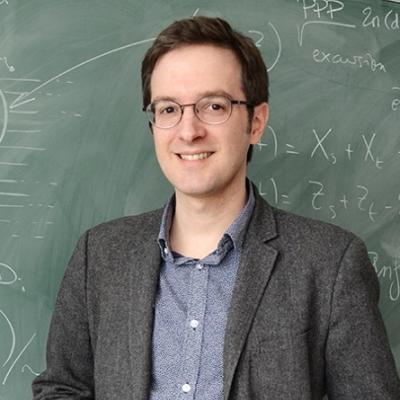 Grégory Miermont, born in 1979, is a French mathematician.

After high school, Grégory Miermont undertook a two-year training to prepare the competitive entrance exams for the top French universities. After successfully completing this training, he was admitted to the École Normale Supérieure in Paris. He studied from 1998 to 2002, and spent the years 2001-2002 as a visiting student at the University of California at Berkeley. He obtained his doctorate at the Université Pierre-et-Marie-Curie in 2003, under the supervision of Jean Bertoin.

He then became a researcher at the CNRS in 2004 at Paris-Sud University and at the École normale supérieure, and was promoted to Professor in 2009. Since 2012, he has been a professor at the École normale supérieure de Lyon, he is also a member of the Pure and Applied Mathematics Unit and a junior member of the Institut Universitaire de France (IUF).

Grégory Miermont is working on the theory of probabilities, specifically on the geometry and scale limits of random planar maps, and on fragmentation related to random trees. He is also currently studying the Brownian tree, including its representation in computer programs.

Junior member of the Institut universitaire de France in 2013

EMS Prize of the European Mathematical Society in 2012

Prize of the Fondation des sciences mathématiques de Paris in 2007

Articles in French and English, Abstracts in both Languages

The Probability and Statistics section of the Annales de l’Institut Henri Poincaré is an international journal which publishes high quality research papers. The journal deals with all aspects of modern probability theory and mathematical statistics, as well as with their applications.