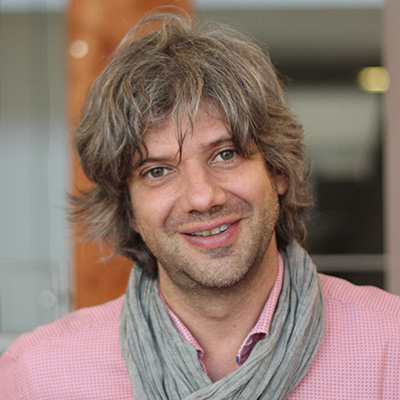 A specialist in NMR spectroscopy, Guido Pintacuda is a CNRS researcher at the Institute of Analytical Sciences (ISA) where he is currently developing new methods to push the limits of the observable, for solid samples including metal ions: a highly competitive area.

Born in Italy in Treviso, he studied at Scuola normale superiore in Pisa. He defended a thesis in 2002 on the properties of metal ions using CD and NMR spectroscopies. At the same time, he completed post-doctoral studies until 2004 at the Karolinska Institute (Stockholm, Sweden), working in Gottfried Otting’s team. The subject of his research was Biomolecular NMR on proteins that contain metal ions. He also used NMR spectroscopy on sample solutions.

In 2003 and 2004, he studied protein-to-protein interactions on molecular assemblies involved in DNA replication at the Australian National University. After another post-doctorate at École normale supérieure de Lyon in the team headed by Lyndon Emsley, he joined the CNRS in 2005 as a researcher in the chemistry laboratory of the ENS de Lyon where his skills on proteins and paramagnetic ions contributed to the team’s work and where he studied the NMR of solid samples.

The team has since moved to the new Lyon Science Park Cité lyonnaise de l’environnement et de l’analyse, in Villeurbanne, part of the Institute of Analytical Sciences (ISA, ENS/CNRS/Lyon 1). It has a unique NMR spectroscopy platform, including the world's most powerful spectrometer.

Guido Pintacuda became director of research in 2009 and head of the "Biomolecular analysis via NMR solid group" at the ISA. Since 2013, he has coordinated a European network on paramagnetic NMR (metal ions), funded by Europe (FP7).