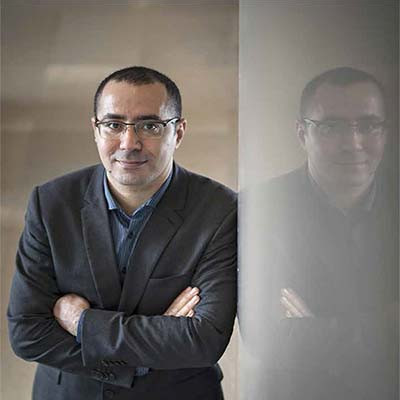 Born in 1972, Makram Abbès is a University Professor at the Ecole Normale Supérieure de Lyon and former junior member of the Institut Universitaire de France (IUF, 2010-2015). After having completed a double curriculum in Arabic and French literature with the ENS de Fontenay-Saint-Cloud and the universities he attended (Paris IV, Paris VII-Denis Diderot), he chose to further his knowledge in the field of political thought as from 1997/1998 by registering for a thesis on Arab political philosophy ("the Andalusian political philosophy in the 12th century through the works of Ibn Bâjja (Avempace), Ibn Tufayl and Ibn Rushd (Averroes)"). At the same time, he integrated the IEP of Paris.

Since he has worked at the ENS de Lyon in 2000, Makram Abbès has been in charge of the preparation for the prestigious agrégation in Arabic as well as supervising Arabist pupils. From 2014, he became director of the Arab studies section in the Language, Literature and Foreign Civilizations Department of the ENS de Lyon. Since then, he has been responsible for the Master’s in Arab Studies centered on the study of the classical and contemporary humanities. He was the founder, in 2017, of the Master’s in Middle Eastern studies in the "European and international studies" option aimed at students wishing to specialize in this geographical area. Makram Abbès is also responsible for the Master’s of Science of Religions and Societies co-accredited with the Université Lyon 3 and the Université Lyon 2.

The teachings he provides in the framework of these trainings give great importance to the political, legal and religious problems present in the Arab world particularly, and in Islam in general, taking into consideration their current dimensions as well as their historic roots.

A specialist in Arabic philosophy, Makram Abbès has devoted many publications to philosophers such as Al-Farabi, Avempace and Averroes, in addition to scholars, jurists, theologians and historians of the classical age (including Ibn al-Muqaffa, al-Mâwardî and Ibn Khaldûn). These authors, as well as the textual traditions they represent or the disciplines they come from, are approached from the standpoint of political thought: governmental rationalities, political advice, philosophy of the State and the theory of war. For some themes (such as war), links are established between classical texts (Koranic exegesis, law) and contemporary works (particularly from Islamism) to provide critical interpretation of the subject, that is contextualized and non-essentialist.

Makram Abbès has devoted many publications to the arts of governing, to the thought of war and to the theological-political problem in Islam (tolerance and intolerance, dogmas and professions of faith, secularism and secularization, etc.).

Member of the Institut Universitaire de France in 2010