Institute of History of Representations and Ideas in Modernities

The IHRIM (Institute of History of Representations and Ideas in the modern era) is a trans-epochal, pluri-disciplinary joint research unit (UMR), covering the period from the 16th - 20th century, focusing on philosophy, French and foreign literature, musicology, theater studies, art history, history of science and technology. The specificity of IHRIM’s research is its historicized approach to literary, symbolic, artistic and scientific ideas and representations. The IHRIM is founded on the belief that the roots and structures of the contemporary world can only be understood, through a profound knowledge of the past from which it originated. The UMR 5317 IHRIM was established on January 1, 2016 resulting from the merger of the LIRE and the IHCP joint research units, based on the similarity of their objectives and research methods, as well as their historical complementarity.
The UMR 5611 LIRE (1995-2015) was a pluri-disciplinary team (French and English literature, music, performing arts and imagery) whose research included the period from the 18th to the 20th century. The originality of its research resided in its effort to reinvestigate all types of literature and the arts (without limits of canon, genre or medium), taking a fresh look at current themes with a resolutely historicized poetic approach to literary and artistic forms.

The UMR 5037 IHPC (1997-2015) brought together philosophers, historians and specialists in French and foreign literature. Its field of study covered the classical period, in the broad sense of the term, covering the Early Modern period. The unity and dynamics of the team were largely pluri-disciplinary, stemming from a certain view of the history of philosophy and the perception of ideas and the arts during the classical period, taking an interdisciplinary stance, requiring a collaboration between historians of science, philosophy, ideas, literature, music and the arts. In addition, the IHCP was selected to study a long "Classical modernity" period (from the Renaissance to the Enlightenment and to look at how this period of radial change served to shape the modern world), taking as its premise that important shifts in the history of ideas can only be understood in the long term. With the scientific and methodological synergy of the two Research Units from which it originated, the IHRIM intends to position itself, through its critical mass and the strength underlying this structure, as a benchmark for research in humanities and social sciences (SHS) on a national and international level. Proud of its history, it intends to pursue ongoing projects according to the themes that have been selected in its five-year plan: 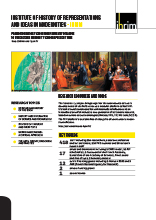 Institute of History of Representations and Ideas in Modernities - IHRIM