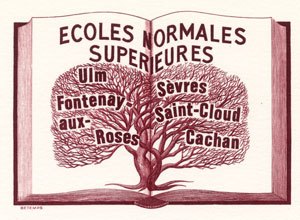 The tradition of Écoles normales supérieures dates back to the Decree of the 9 Brumaire AN III (1794) which led to the creation of the first ENS, dedicated to the training of educators who would train future teachers. This symbolic date can be found on the pediment of ENS in rue d’Ulm in Paris.

Fontenay and Saint-Cloud were created by Jules Ferry

A century later, Jules Ferry and Ferdinand Buisson, who initiated and inspired the laws of 1881, making primary school - compulsory, secular and free, created schools to train teachers for secondary and primary schools.

To train professors, inspectors and school directors for primary teaching

From primary teaching to secondary and higher education and onto research

The ’80s: a new outlook for the ENS Schools Jules Ferry (1832-1893) was a French statesman and republican.
One of his important works is the non-clerical organization of public education. Following the republican programme he proposed to destroy the influence of the clergy in the university and found his own system of republican schooling.
He reorganized the committee of public education (law of 27 February 1880), and proposed a regulation for the conferring of university degrees, which, though rejected, aroused violent polemics because the 7th article took away from the unauthorized religious orders the right to teach.
He finally succeeded in passing his eponymous laws of 16 June 1881 and 28 March 1882, which made primary education in France free, non-clerical and mandatory.
In higher education, the number of professors, called the "Republic's black hussars" because of their Republican support, doubled under his ministry.
[Read more]