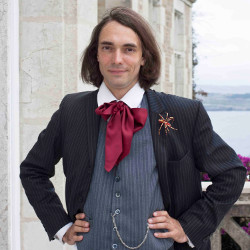 Cédric Villani was born in 1973 in Brive-la-Gaillarde. After going to high school in Toulon and Paris, he studied mathematics at the École normale supérieure in Paris, from 1992 to 1996. He worked for four more years in this institution as an Associate Professor.

In 1998, he defended a thesis on the mathematical theory of the Boltzmann equation. His work was inspired by his thesis director Pierre-Louis Lions, but also by Yann Brenier, Eric Carlen and Michel Ledoux.

From 2000 to 2010, he was a teacher-researcher at the École normale supérieure in Lyon, and today he’s currently working at the Université de Lyon. He is also a Visiting Professor in Atlanta, Berkeley and Princeton.

Since 2009, he has been Director of the Henri Poincaré Institute in Paris. This national institute is 80 years old, and is dedicated to receiving visiting scholars. It plays a central role at the heart of French mathematics.

His work has earned him several national and international awards, including the Fields Medal, awarded at the 2010 edition of the International Congress of Mathematicians in Hyderabad, by the President of India. Since then, he has been a key spokesperson and ambassador for the French mathematical community in the media and in politics.