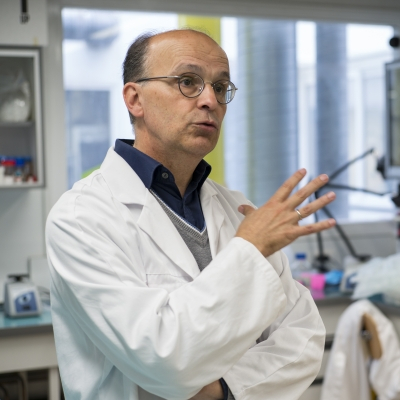 Born in 1957 in the Netherlands, Jan Traas studied science. From 1982 to 1987, he supported a thesis at the University of Nijmegen in the Netherlands, and then continued with a post-doctorate on the mechanisms controlling the expansion and cell division of plants at the John Innes Institute in Norwich, Great Britain.

In 1987, he first entered the Institute of Agronomic Research (DOL) in the Netherlands and quickly joined Inra in Avignon and then in Dijon. Having settled in France, in 1991, he joined the Laboratory of Cell Biology of Inra Versailles-Grignon, where he became director in 1996. In 2005, he was appointed Research Director. He then joined ENS de Lyon at the laboratory of Reproduction and Plant development (RDP) which he directed from 2007 to 2014.

For Jan Traas, exploring the complex systems that contribute to the functioning of living beings is a passion, and perhaps that is what made him decide to take up a scientific career instead of an artistic one, as a painter. This decision has been proven to be a wise choice for this researcher, who, for the last twenty years, has devoted himself to the biology of plant development and whose work and multidisciplinary approach have been recognized and awarded by the scientific community.